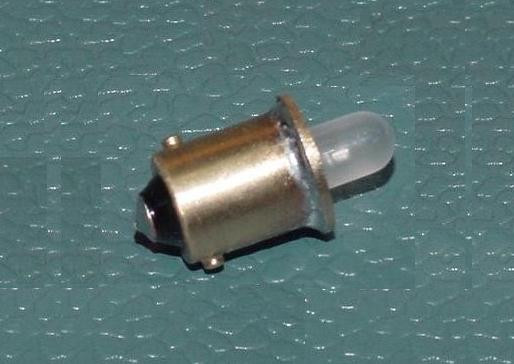 This Drake Solid State single Blue LED Meter Lamp for All Drake 4-Line Radios (except the T4X-C & R4-V) is a great addition to make your Drake 4-Line radios look fantastic!

NOTE: If you need the (2) lamp Set for your radio I have another listing for the set of two which is cheaper than purchasing the two lamps you will need individually!

Drake 4-Line Meter Lamp is for all 4-Line radios except the R4-V:

Notice: The Drake T-4XC Transmitter and the RV-4 series VFO use different lamp styles from all other 4-line equipment. Each uses different part numbers and are offered separately.Simple to Install:

Installation is straight forward and every attempt was made for ease of installation. This is a direct lamp replacement and can be performed in about five minutes.Drake has used blue filters since the days of the TR3 transceiver. This continued into the later 4-Line and 7-Line equipment. The problem occurs in later years when the blue filters begin to change and the displays end up looking green. Since the meter and frequency displays are illuminated by incandescent lamps they emit a glow that leans toward the red end of the emission spectrum. Thus a blue filter being back lit by a yellow/red glowing filament will naturally result in a greenish illumination. In the past people would replace the blue filters with newer and perhaps darker blue filters. This was a step in the right direction, but you are still stuck with a light bulb that will eventually burn out and require replacement.

As a replacement for the blue filters I have developed a Blue illumination kit to replace the existing incandescent bulbs provided with the 4-Line equipment. The kit consists of two custom manufactured LED lamps designed as plug-in-play replacements for the original #47 incandescent bulbs. The new LED lamps use the same style bayonet bulb base as the originals. There is no need to replace or add additional gel filters, best results are obtained by removing the original filters all together!The life of an LED is long, typically 80,000-100,000 hours (almost 10 years of continuous power), and most of us will never experience one going out.

Once the original lamps are replaced you should never have to replace them again. You will save on current draw! The two LED lamps only require a total of 40mA whereas the original #47 lamps have a total of 300mA current draw. That's over one quarter amps less current draw from the power supply and negligible heat dissipation from the LED's.

These are not mass produced lamps. Each lamp is hand assembled. The bayonet bases are solid brass. The meter lamp uses a frosted lens blue LED. The analog display (PTO) lamp has a special manufactured diffusion lens which surrounds the blue LED. This dispersion lens is milled from solid semi-transparent plastic. It is not a hollow plastic covering! By using a solid lens material the emitted light is dispersed a full 360 degrees around the lamps sides and a full 180 degrees toward the top side.

The picture below demonstrates how well this custom dispersion lens works installed in the Drake R4C receiver. The picture is taken from the side of PTO assembly with the top receiver case cover removed.